Yoga is my favourite sportif activity (Maybe because it doesn’t always feel like sport) And if you do Yoga it is good to have some pairs of nice Leggings. My newest ones are made of Jersey with a flowery print. (Made from my TNT pattern  “Roxy” from La Maison Victor Autmn 2014)

Finally I made the Sierra Bra from the free Pattern by lovely Madalynne. It’s my first attempt at sewing a bra (or underwear in general). But her sewalong was very helpful and left me very proud of my first piece of underwear. And it is so comfy that I like to wear it everywhere… and do Yoga.

The third piece of my new Yoga gear is a simple shirt for keeping me warm during Shavasana. It is based on my selfdrafted hi-low shirt. I just added a wide band to the hem and left the sleeve hems and the neckline undone to give it a casual look.

And before I forget… the finale of Me Made May… 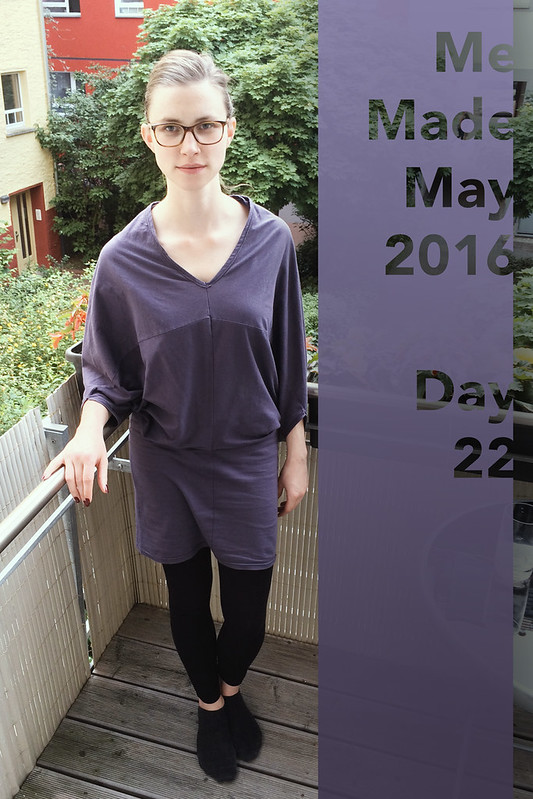 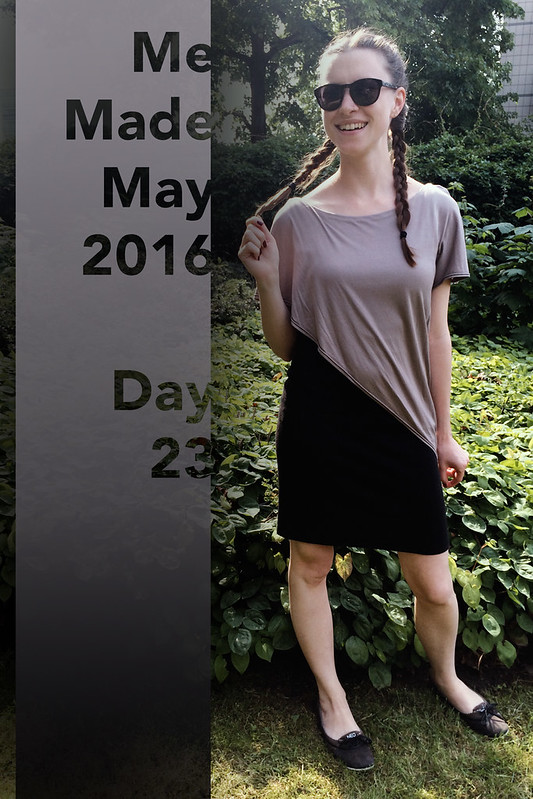 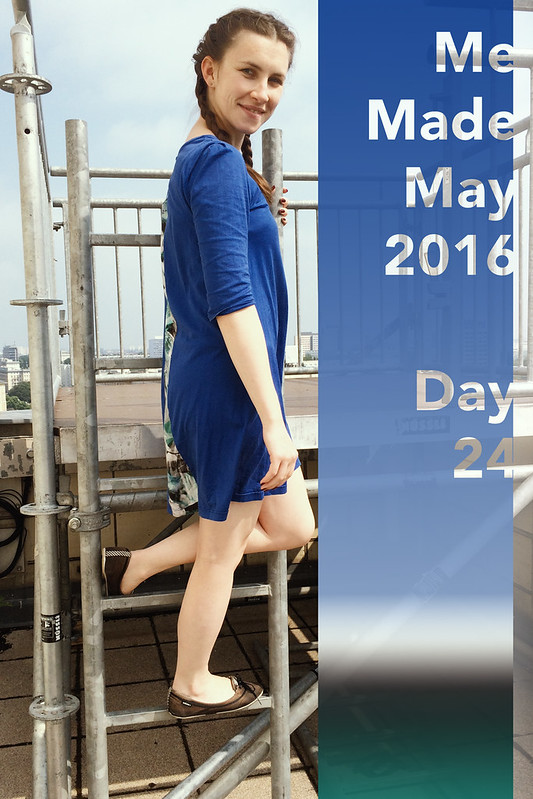 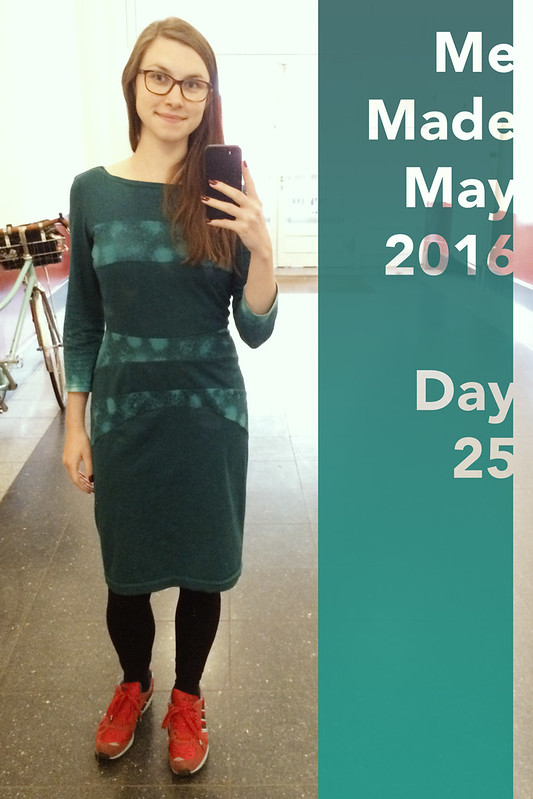 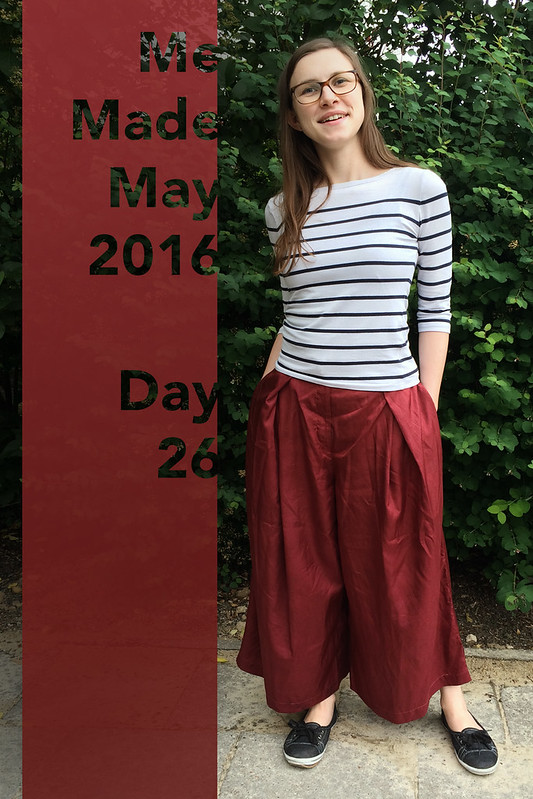 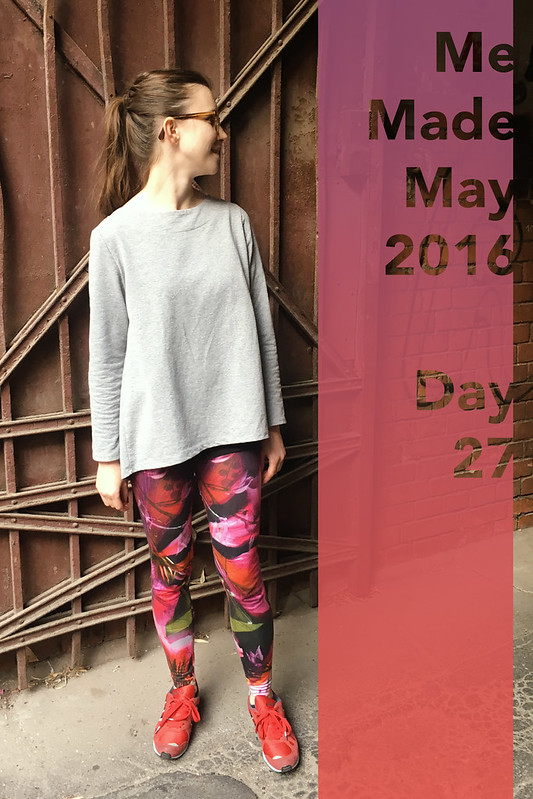 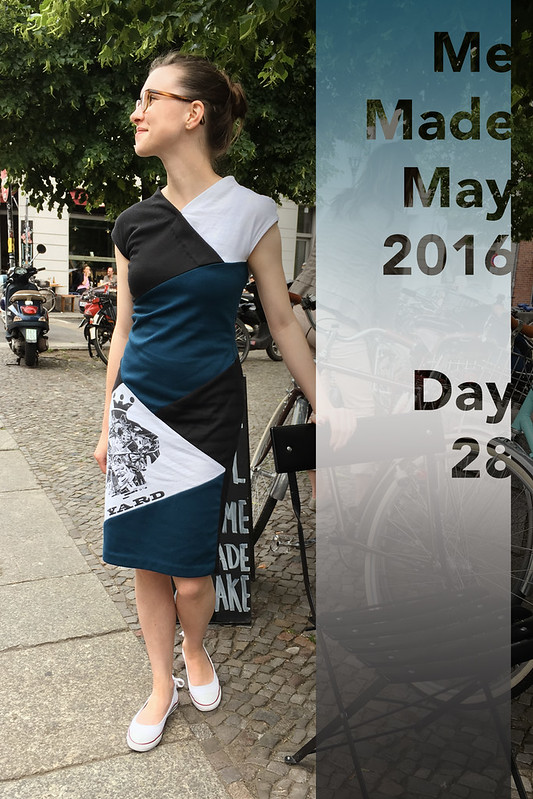 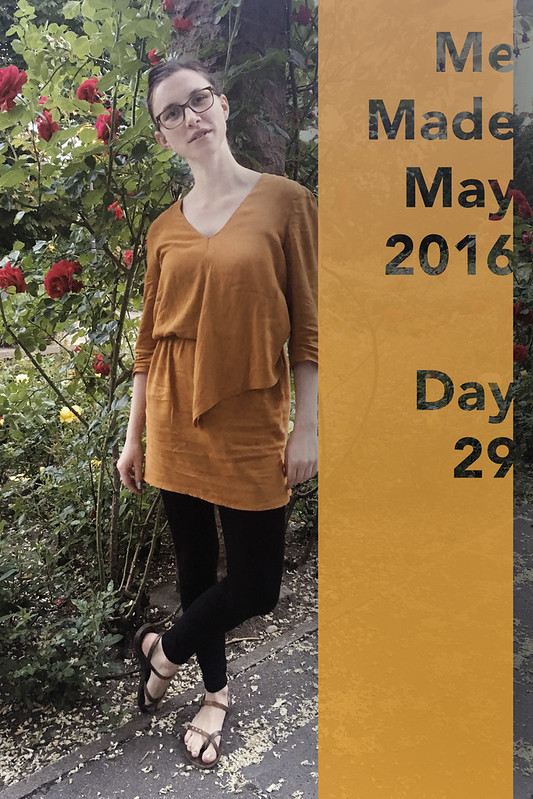 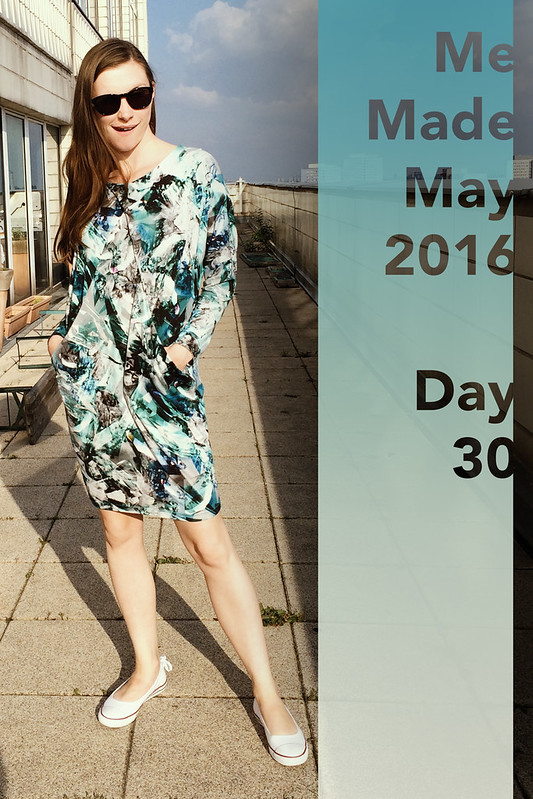 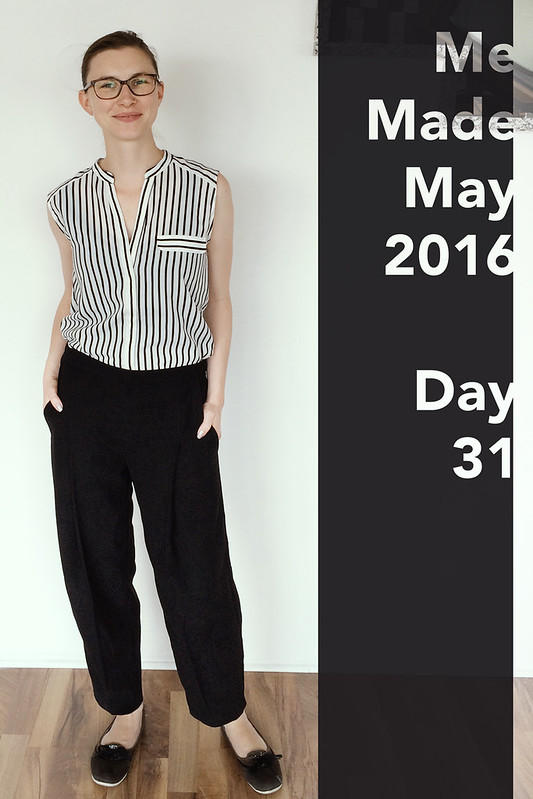 See you next May! (Well, I promise to show you some of my creations before that 🙂 )

I call this dress French Trench since it is a trench dress from the magazine La Maison Victor (wich is actually Dutch…) Like my Leggings (1 & 2) and the Top of my last Christmas outfit the pattern is from LMV Autumn 2014.

I bought the fabric several years ago in Porto, Portugal. I have no idea what it is. Something synthetic with some stretch. It took me a while to gather all I needed (even if it just were 3 buttons and matching thread). But the sewing process was rather fast (the magazine has good instructions with many pictures)

We shot the pictures when I was on a work trip in spain.

And here are some behind the scenes shots. I was told to shake it off, because my pose was too stiff… so I shook it off… 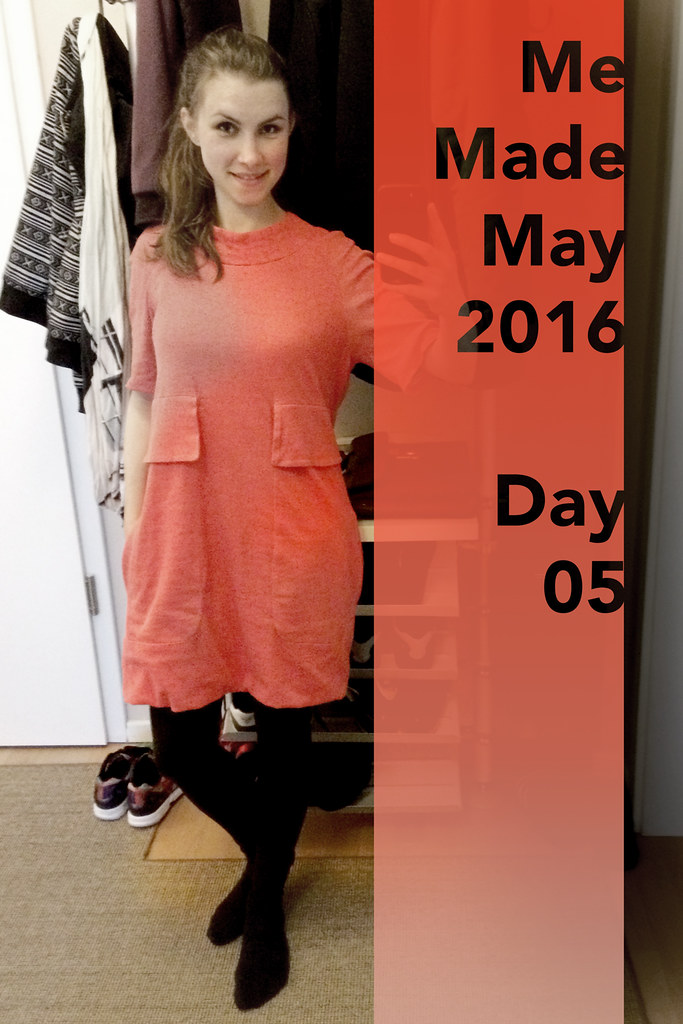 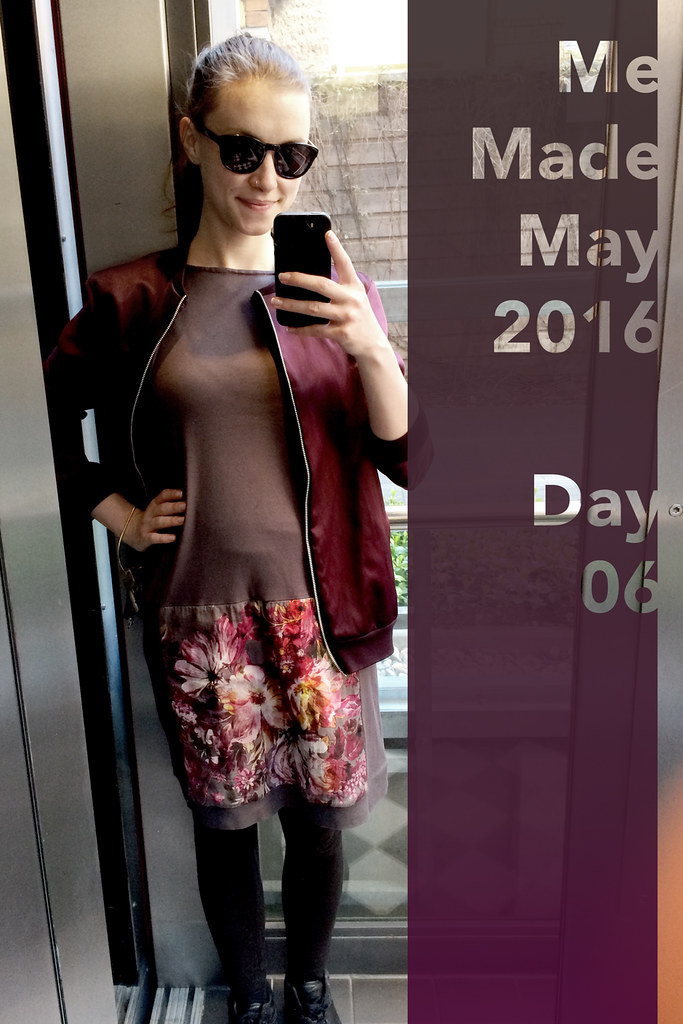 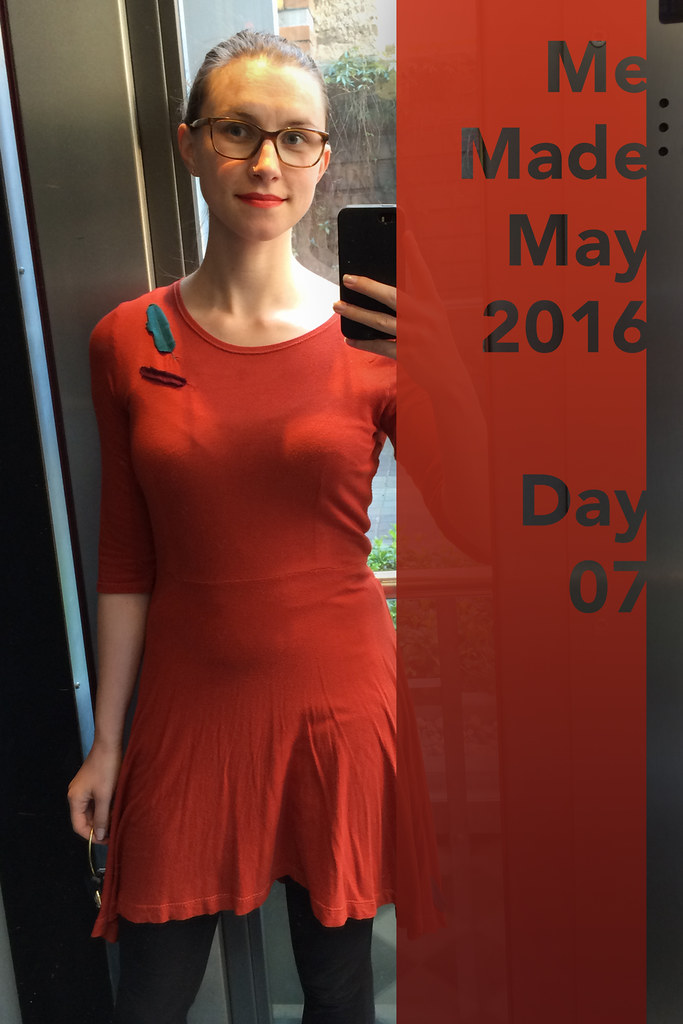 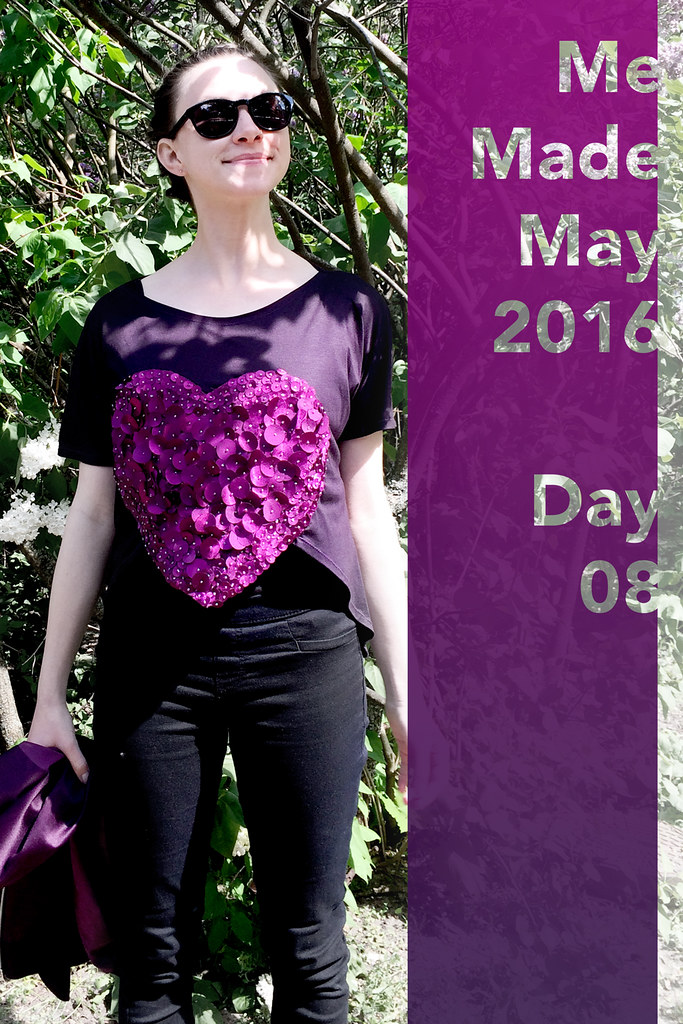 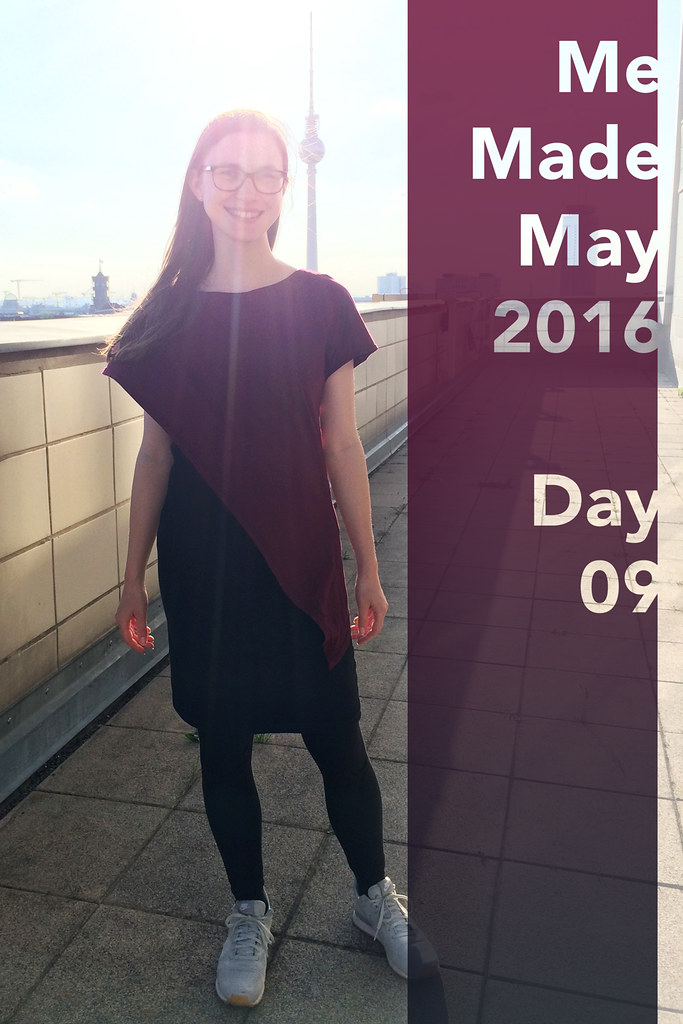 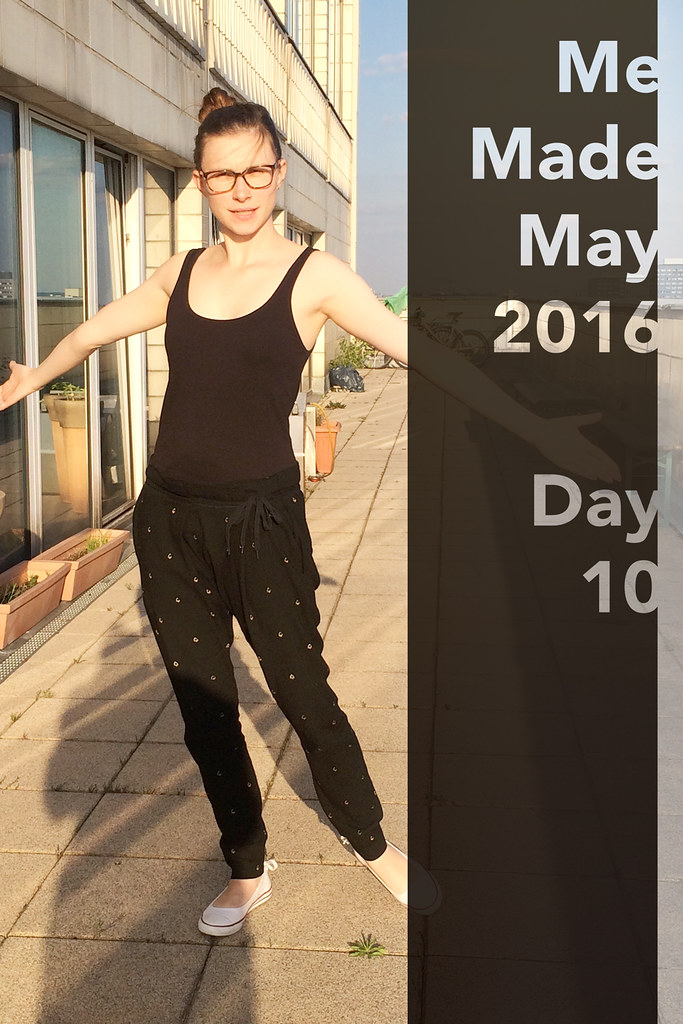 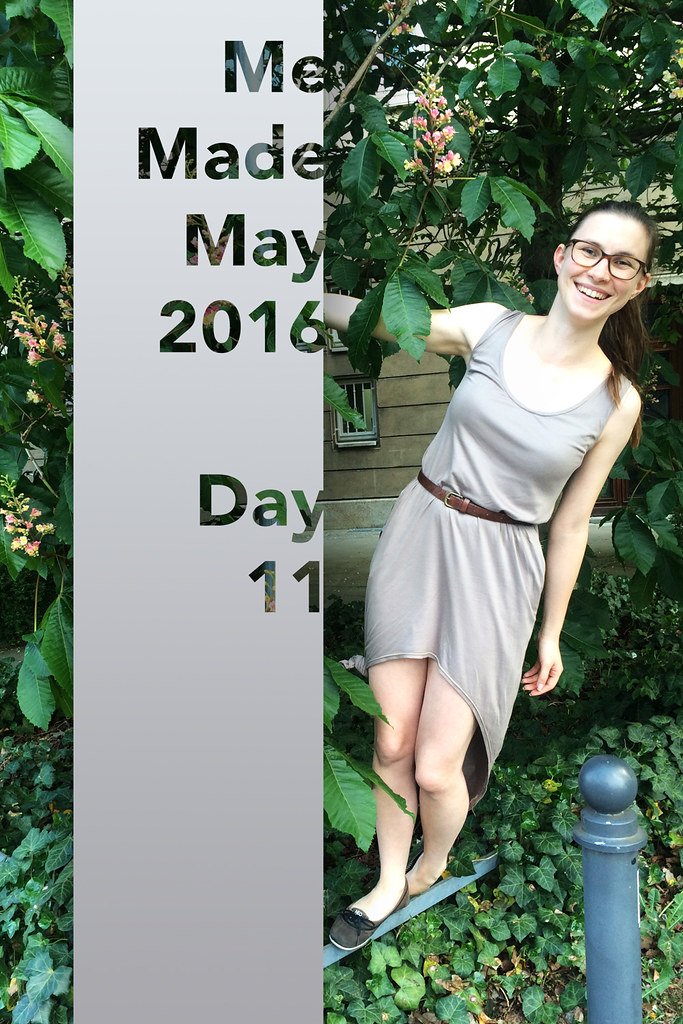 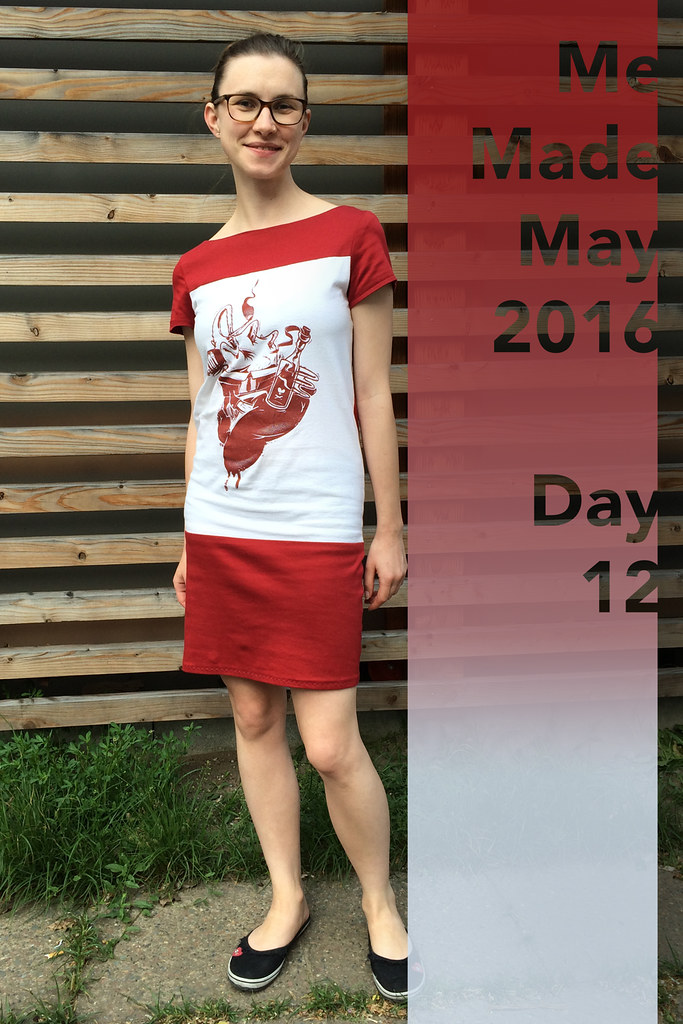 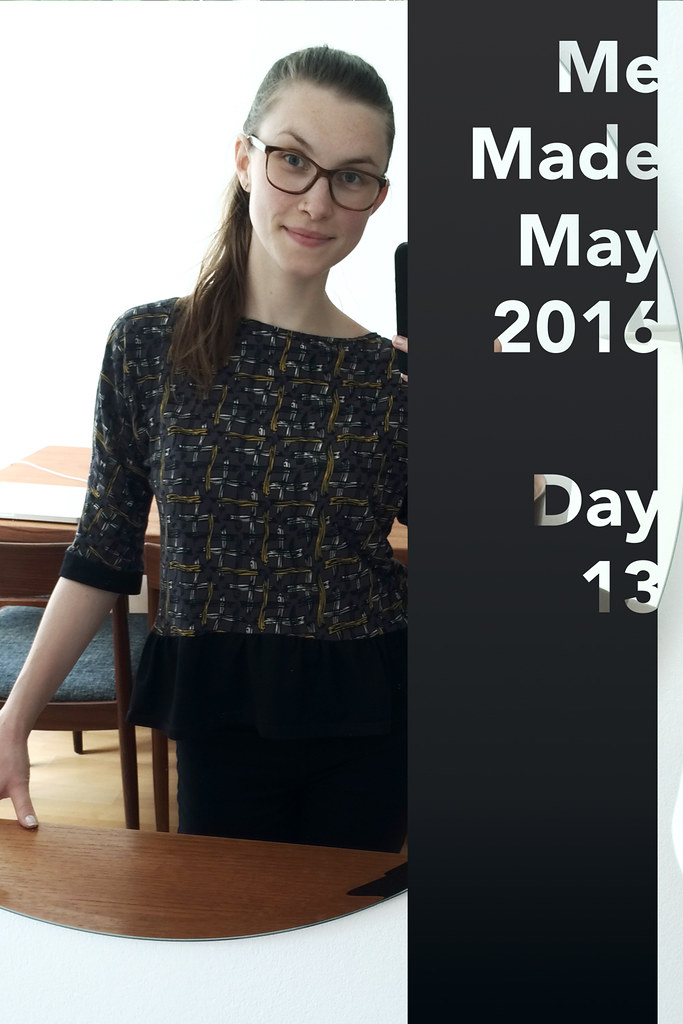 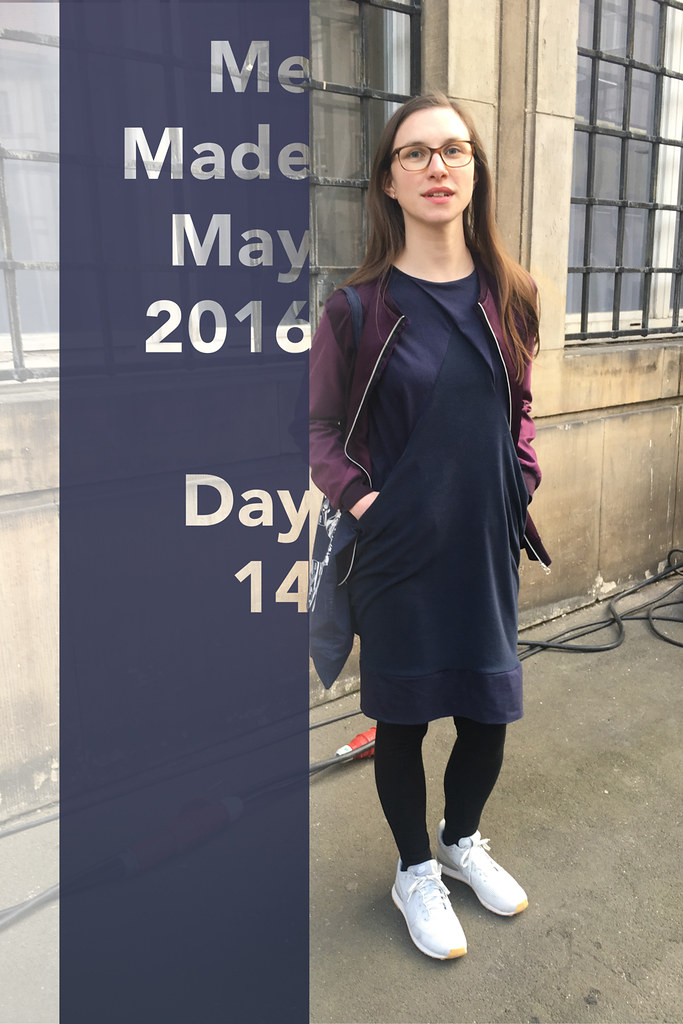 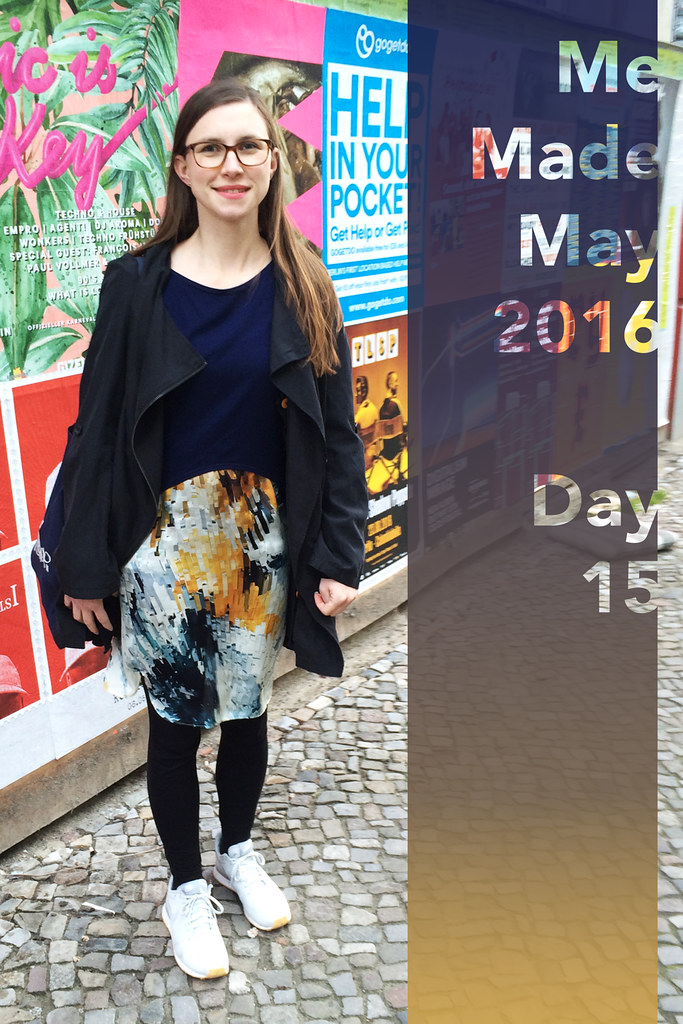 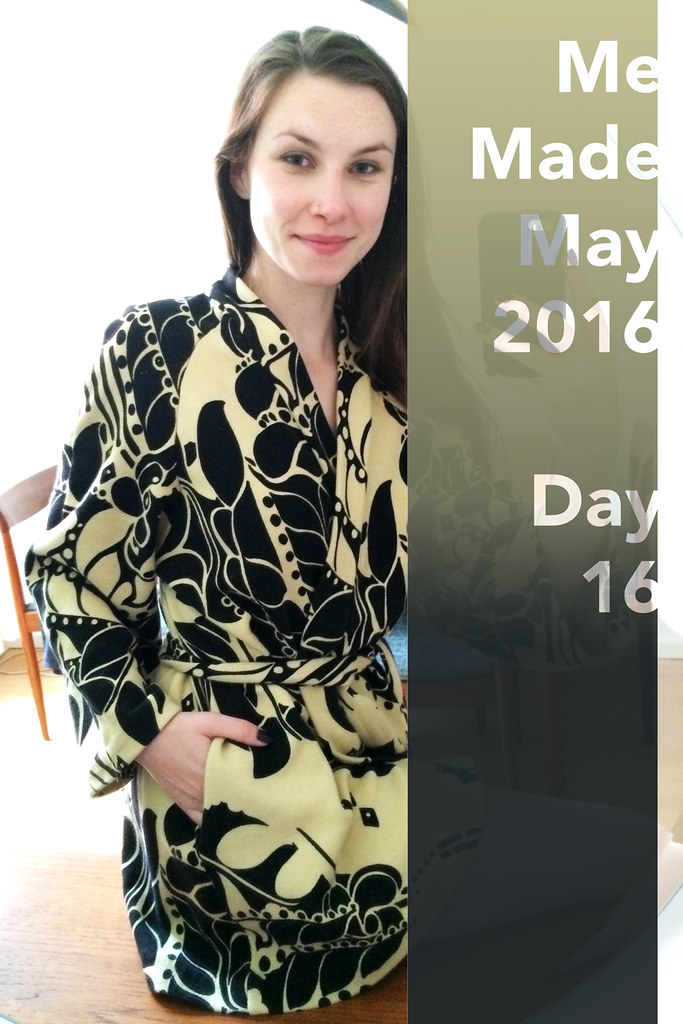 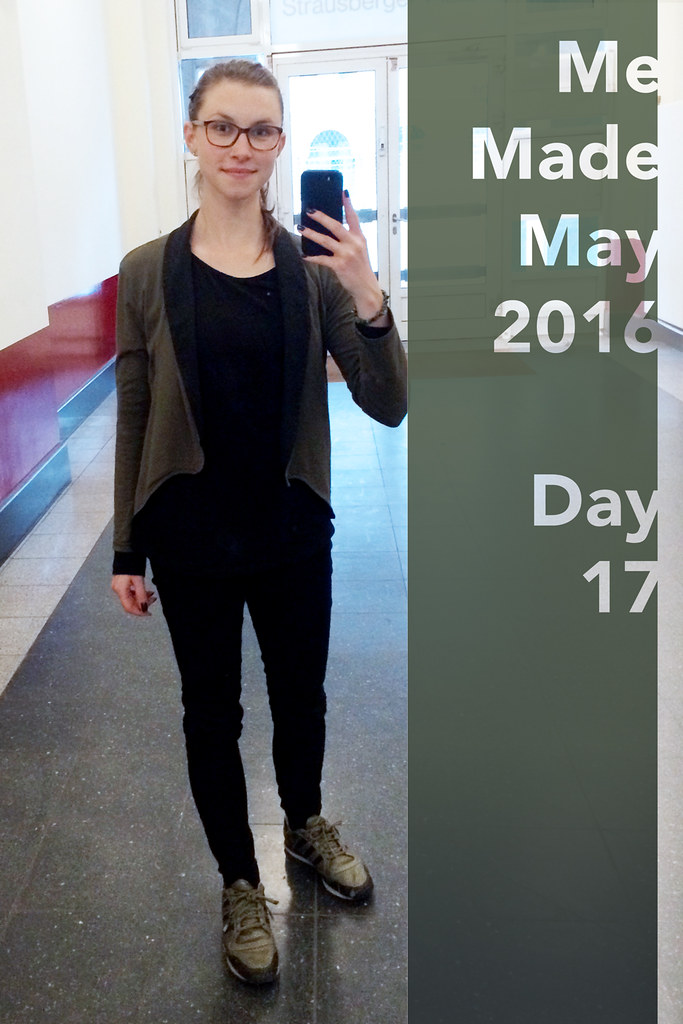 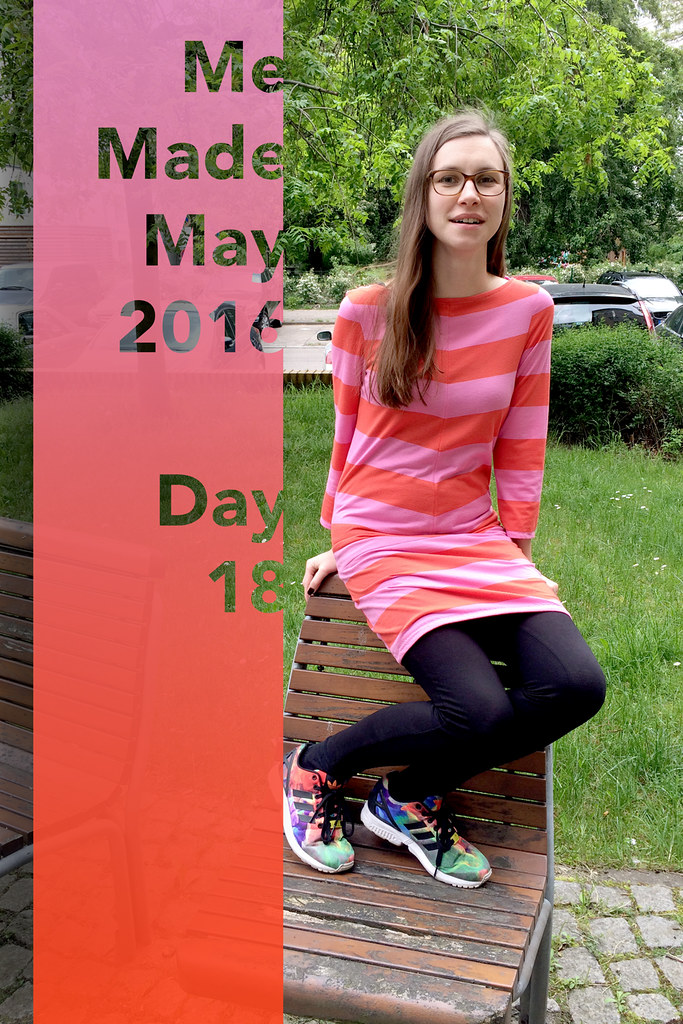 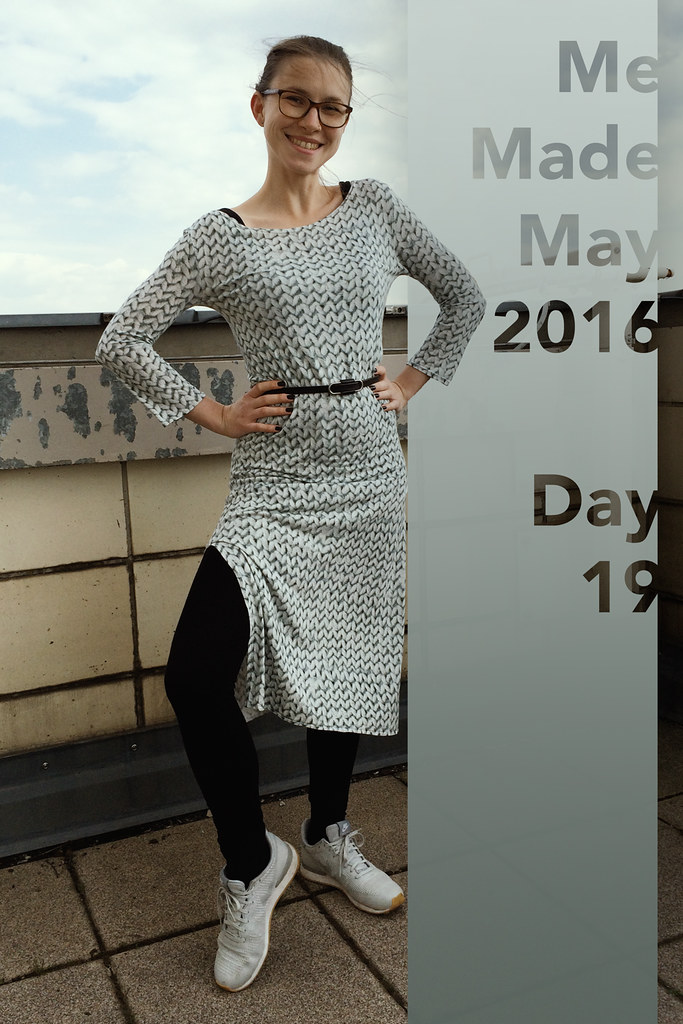 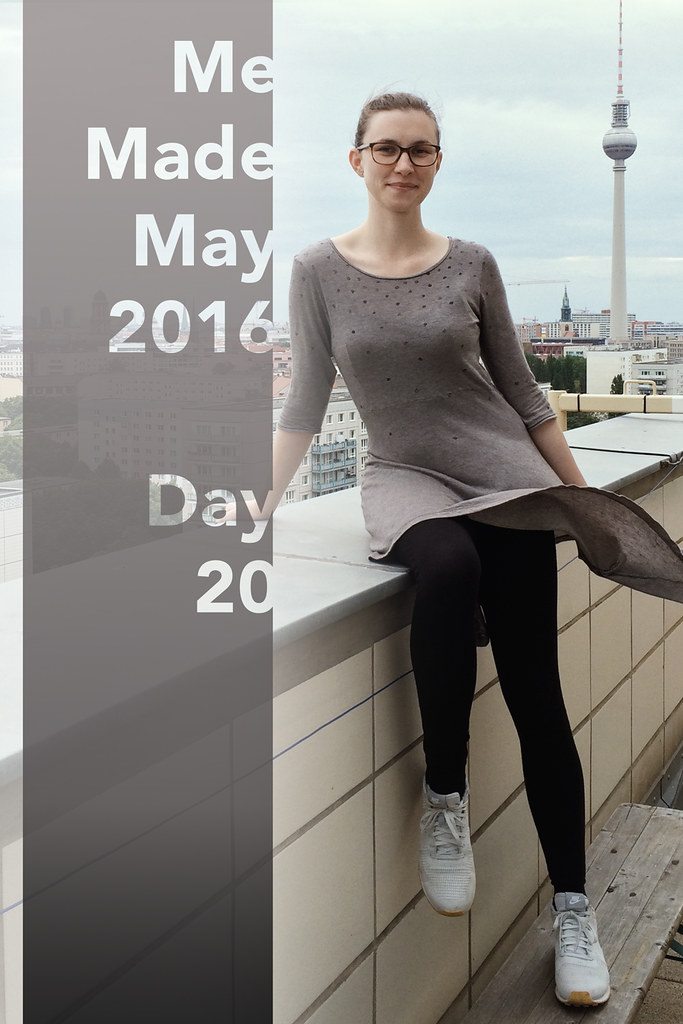 I wanted to make a top or a dress with big pockets after I found some inspiration online. One was the lovely embroidered tee by Katy of katyandlaney.com.

I accompanied a friend to the fabric market at Maybachufer here in Berlin. I didn’t need something special. I went home with some neon yellow lace (it was only 2€/m and perfect to try the Sierra bra pattern), soft and fluffy fleece with sweet little animals (to make a gift for a little baby boy) and a remnant of a black and red patterned synthetic fabric (obviously the leftover from the fabric Wiebke of Kreuzberger Nähte bought to make her Lady Skater dress)

Katy drafted the pattern for her embroidered tee herself. But since I am a lazy sewer I was looking for a pattern to start with. I had something lose or boxy in mind. In my archive of Burda magazines I found this vintage blouse pattern (No. 109 from 12/2011) I was curious how the sleeves may turn out, since they have a rather unconventional construction. I traced the smallest size (36, a bit bigger than I usually need… but I wanted it a bit lose anyway) and added only a little seam allowance. My fabric was less than 1m long but I managed to put all pattern pieces on it and had a little rest for the pockets.

Now I had to decide how the pocket should be shaped. I considered pockets with round (like Katys) or angled corners and made paper pieces to try it out.

After I decided for the angled ones, I experimented with the size.

I didn’t use the pattern pieces for the collar and the waistband. I just used a folded stripe of fabric the length of the circumference of the neckline to finish it and hemmed the lower edge of the top. Finally I made and attached the pockets. I sewed them in place at the upper edge and secured them by hand in some spots.

I was very lucky to pack my brandnew top for my work trip to Andalusia. The weather was nice and sunny but there was also a very strong breeze.

I wore it on day 4 of Me Made May and here is what I wore the other days: 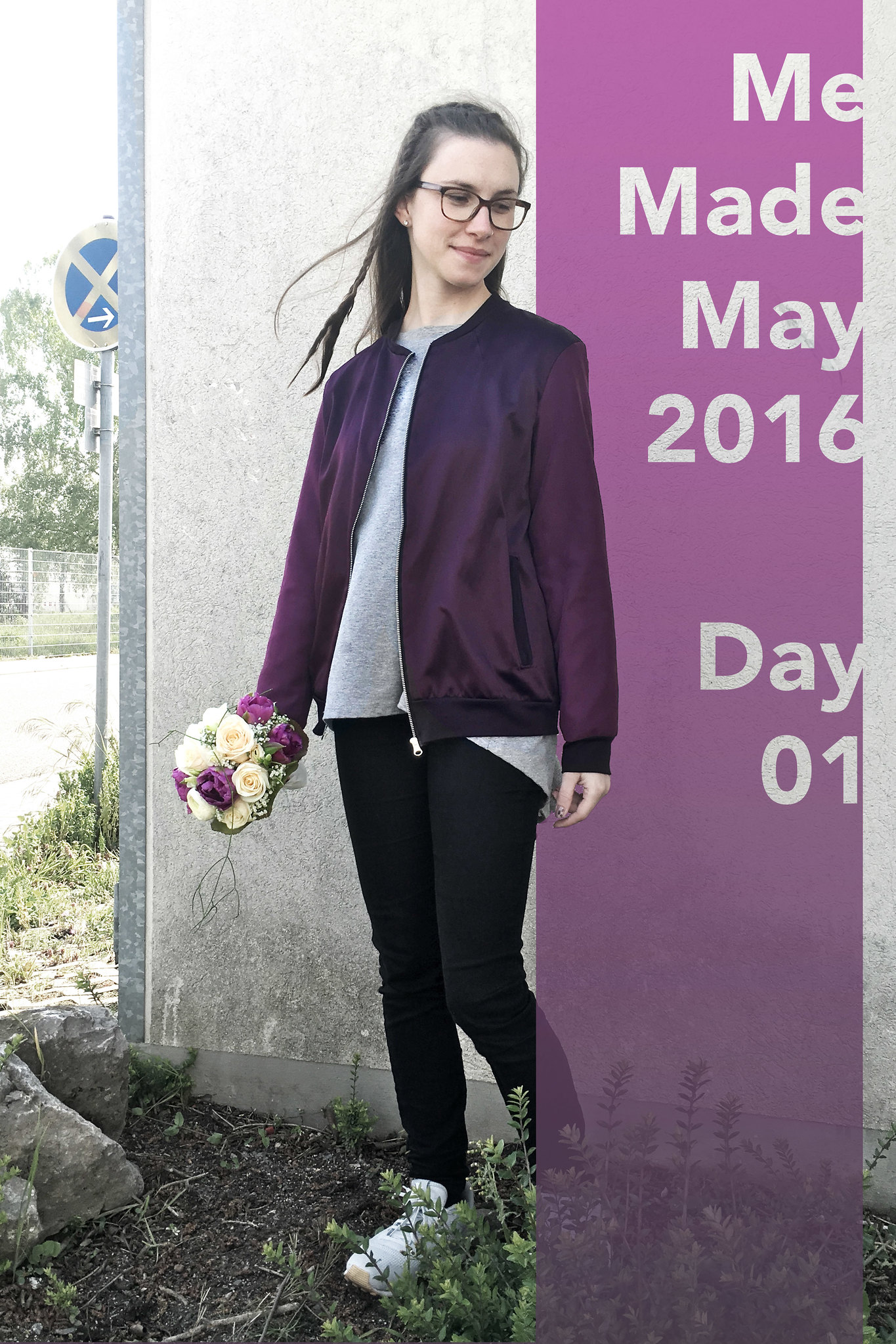 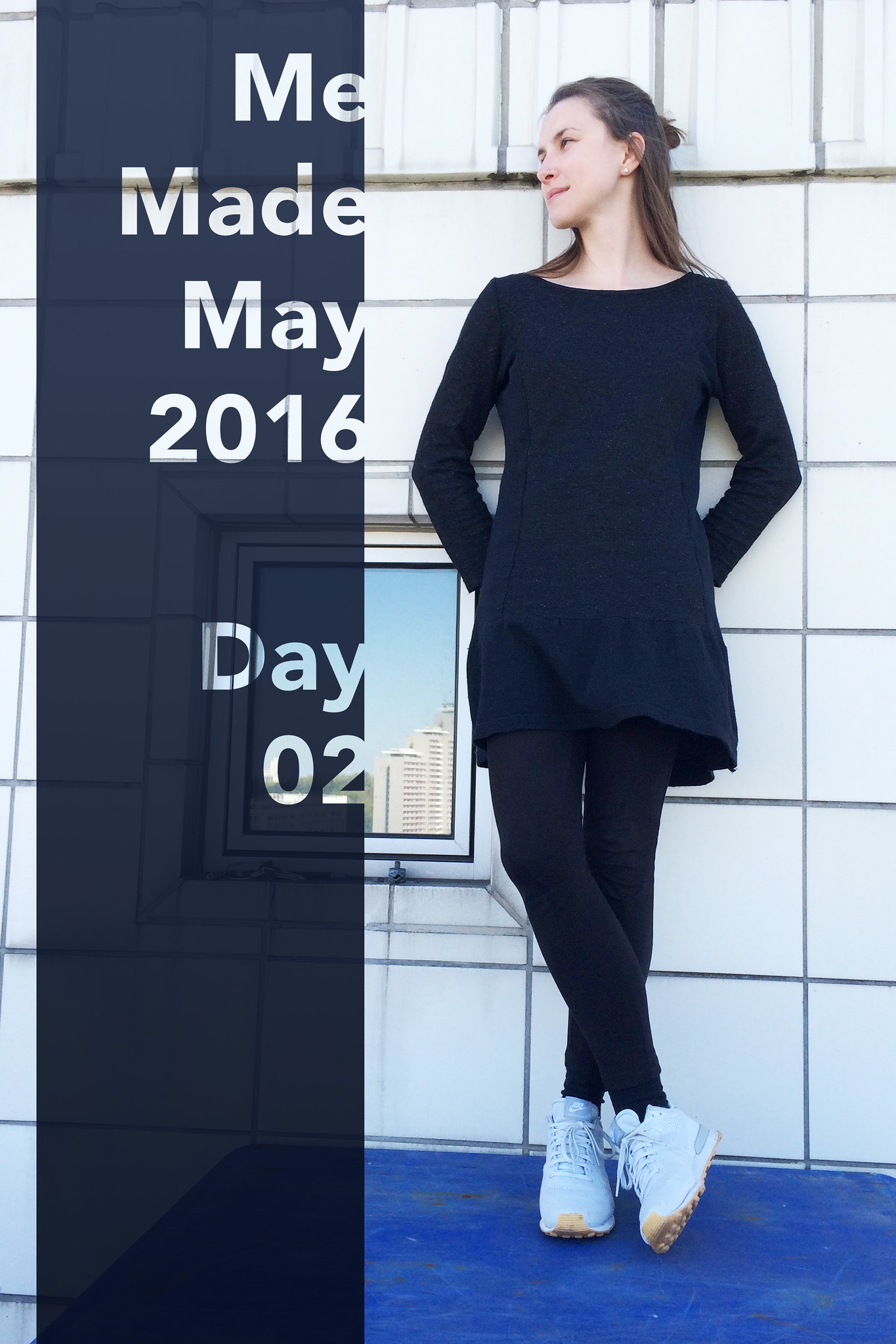 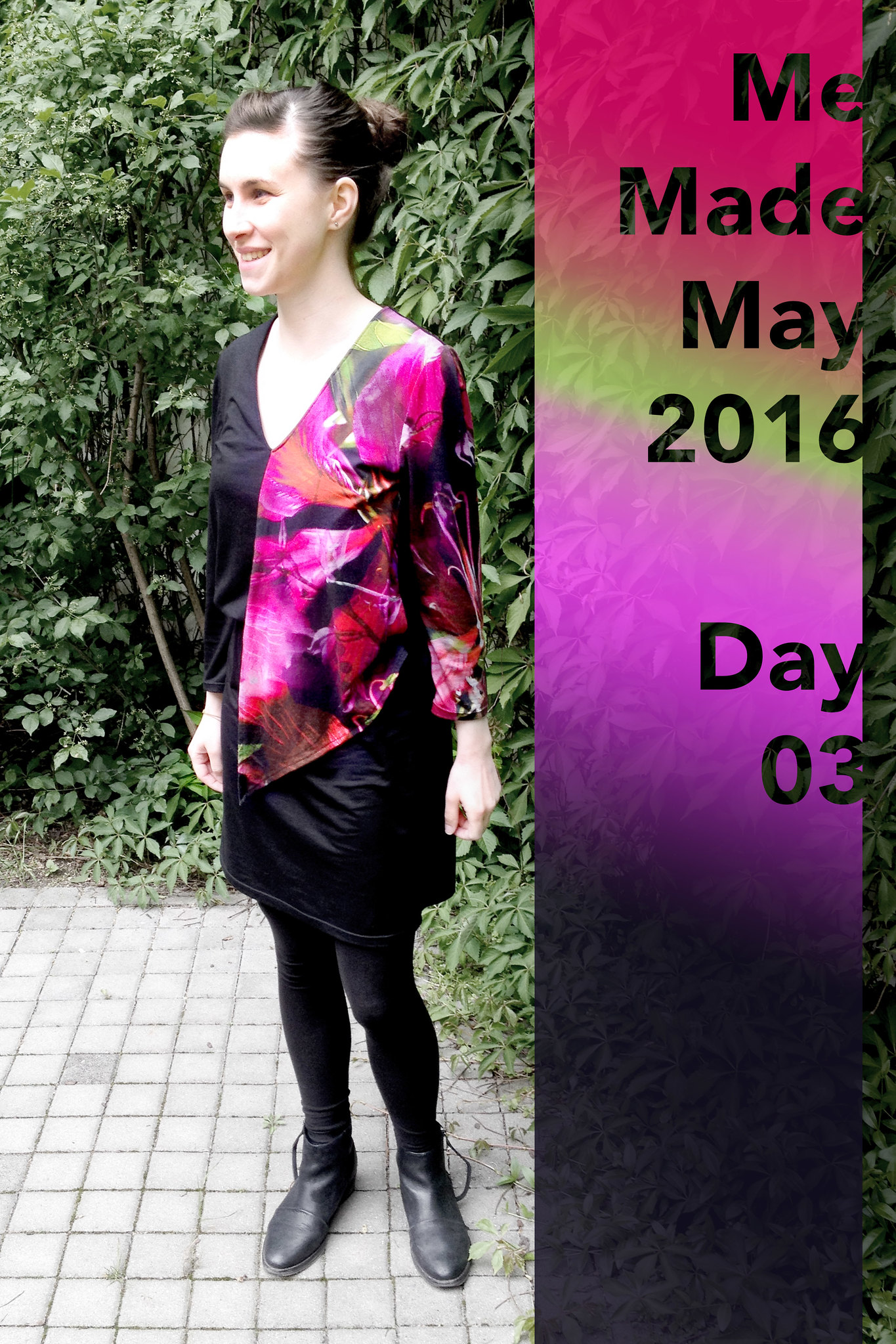 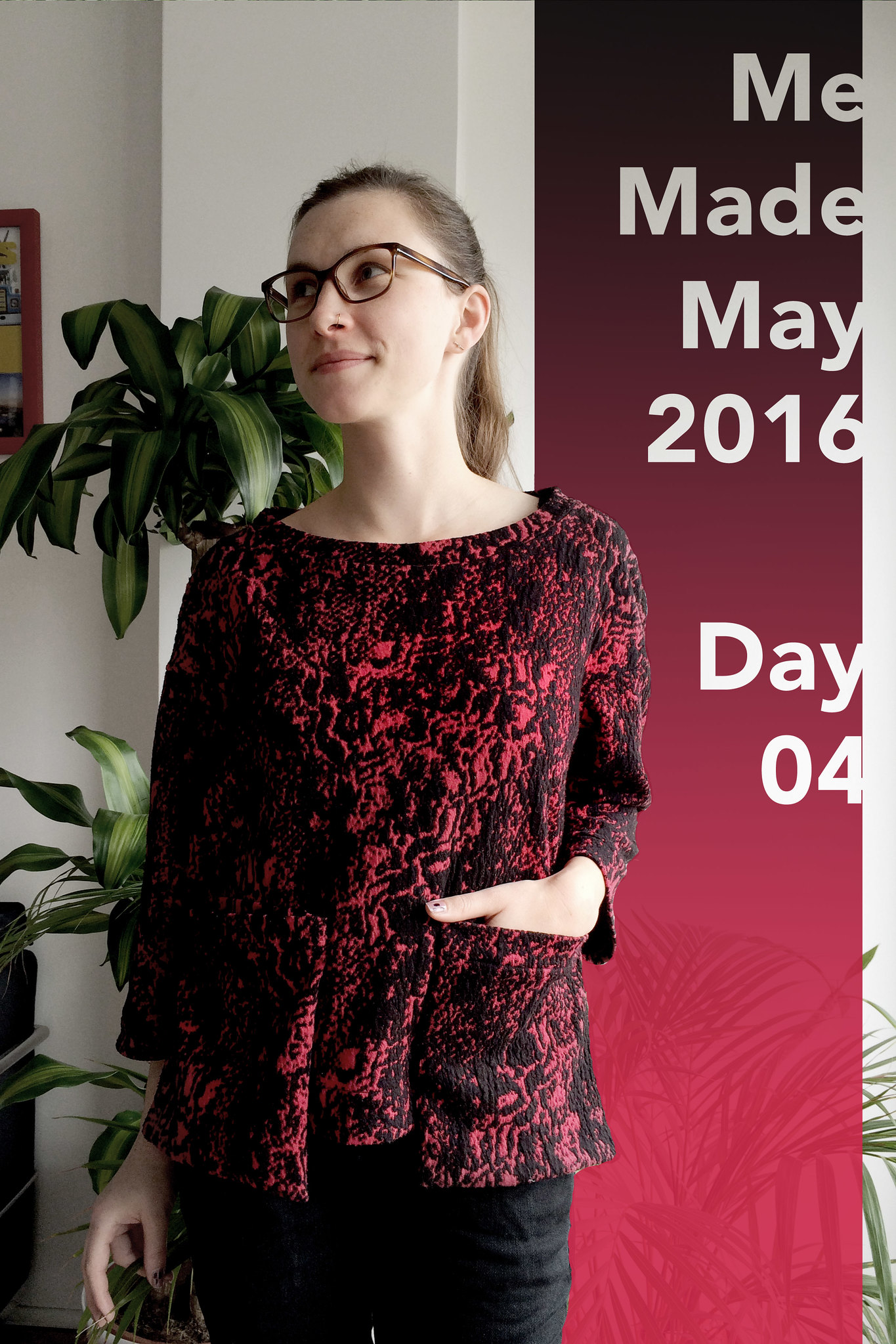 How is your Me Made May going?

I finished an UFO (unfinished object)! (And to write about it, took me almost as long as the sewing process) It all began with a coat from J.C. de Castelbajac. I pinned it to my Style pinboard at Pinterest because I liked the collar. Buying that coat was not an option. I don’t spend that much money on clothes for myself. But I thought about adding this style of collar to a selfmade garment. And then Burda read my mind.

I always check out the patterns Burda offers with every new issue and I browse the member projects of burdastyle.com, burdastyle.de and burdastyle.ru (sometimes even the Polish website)  – Let’s praise Google Translate at this point 🙂 And there it was. A dress pattern from Castelbajac with the collar and the giant pockets of the beloved coat. But there was a realization too: Burda doesn’t sell it’s designer patterns as a download. So I had to order the printed magazine from december 2014 and trace the pattern pieces from the pattern sheet (did I mention that this is the part of sewing I dislike the most?… followed by ironing…) The pattern was marked as ‘masterpiece’ but I thought with the power of the internet I will manage to sew this dress. The internet told me, that the most complicated part are the pockets. I read everything I could find about it at this point (most of it in french) Burda instructions aren’t very helpful (even in your native language). Everything was cut out and the pockets were assembled.

I made pictures of every step (and thought: There is a fine line between genius and insanity… who thinks of a construction like this?)

Now it was time to put the pockets and the rest of the dress together. The instructions were confusing and so I tried to do it my way (the ‘try and error’ way…) and ended up with the two pockets sitting at different hights… in 2cm different hights… while ripping it up again, I realised I chose a bad fabric for this one. It called for something like wool. But I wanted to have this dress in a very soft (and very stretching yet not very stable) printed sweat something (stash busting…a resolution that’s not always the best idea)… I had to be very careful because you saw every stitch I made before and the fabric ripped very easily.
And then I moved and forgot about the dress for a while (because I didn’t want to wear a lined sweat dress in summer anyway)
When my sewing stuff found it’s place in the new sewing room I took courage again and wanted to finish this dress. I managed to set the pockets in at the same hight (but still not in the way the instructions told. Because 1. I just understood them, when I found this helpful picture from Marie-Noelle

and 2. that wouldn’t have worked with my fabric anyway)

During the process I found out that my main fabric is quite transparent and so I chose another, lighter fabric for the linig (not the green splattered one I already used for the pocket bags) The rest went relatively smooth ( well, there were already enough disasters for one dress)

In the end the lucky cat was with me 🙂

Do you have UFOs like that? Isn’t Me-Made-May a good occaison to finish them (or to write about them… I still have some UBOs – unblogged objects)